Snow day! Great reason to lie on the couch all day and interweb it up (I've been littering facebook like a champ). Which is what I’d be doing no matter the weather because I am sooo Sore! I’ve been really sore before, like after climbing for a week in Indian Creek, slogging up and down a 1000 ft. scree slope in Canada, or 5 days backpacking on Austrian limestone. I think this might beat those. In fact the only reason I’m not crying, like I was on day 3 in Austria, is that I can sit on the couch all day.
You see, yesterday, I participated in my first Crossfit Competition, The Women’s WOD Fest at Crossfit South Denver. It was a blast and so humbling! The ladies were amazing; the judges/coaches were wonderful and very entertaining. I came in last place, but with few regrets. I accomplished more than I thought I could. I’ve got some nice welts from the KB clean and jerks, by far the worst part. Here’s a video for fun (the video quality is pretty poor but the music is awesome!):

Afterwards I had ice cream, cookies and pie! (Plus, some salmon and asparagus) To top off my bender, this morning I got French toast from a restaurant I hadn’t been to in years. Unfortunately, it did not live up to my scrumptious memory. I was craving nutrition. I ended up eating my eggs and only 3 bites of French toast. So, at home I whipped up some pumpkin muffins that seem so carbolicious, but are grain and sugar free.

I’ve made these muffins without separating and whipping the egg whites and they came out delicious, but dense. So that really is an optional step. Funny story, I ended up whipping the egg whites by hand with a whisk because I broke my electric mixer while mixing tile thinset last month. The bathroom tile looks great, but I need a new handheld mixer. 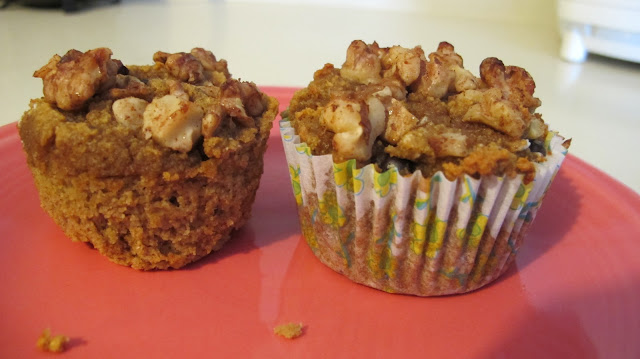 6.     In 2 batches, fold the egg whites into the mixture. Fold gently by slicing the middle with a flat rubber spatula and scraping to the outside of the bowl. Turn the bowl slightly and fold again. Keep folding until only very small white spots remain.

7.     Pile muffin mixture into cups. It will fill them up completely and then some.

8.     Mix the topping ingredients and sprinkle on top of muffins.

10.  Cool in the pan for 5 minutes, then take out muffins and place on a cooling rack to cool completely. 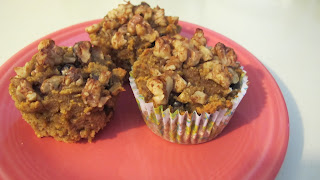 Cerri
Denver, Colorado
I love food. Love cooking it. Love eating it. Desserts are my passion. However, I’m slightly obsessed with being healthy. I love playing outside, mostly rock climbing, but most anything will do. Crossfit is my new fixation. Sam (the hubby) and I travel and play as much as we can. I teach first grade, which is hard work, but frequently fun and always hilarious! I also love animals, which leads to my wild food transitions over the past 5 years… typical american.. vegan.. vegetarian.. sometimes gluten-free.. now pescetarian (fish, no meat) with a Paleo tilt. Gotta make your own choices. I understand and respect all my friends’ food lifestyles. But now I’ve got a little something for everybody.