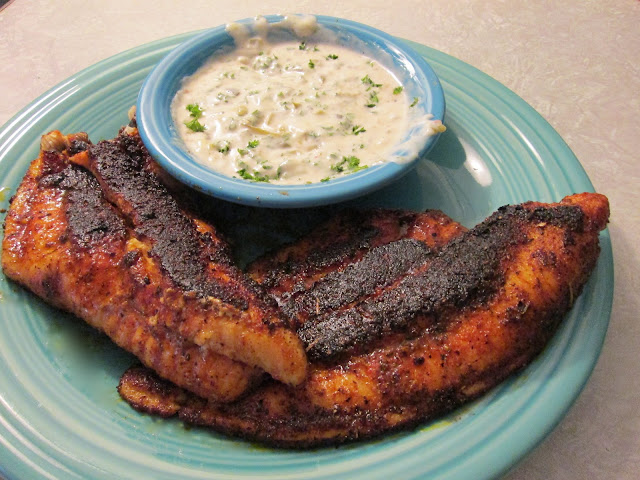 Here's some interesting tales from my weekend (Totally unrelated to catfish) that you may or may not enjoy. Or just scroll down to the recipe. I'll understand.

Story # 1
I spent 5 hours Saturday, completing my final 6-page paper for an online grad class. At some point, I thought that it would be wise to save this in my online dropbox. It would be terrible to have any technical difficulties and lose my work. Stuff like that always happens when you procrastinate, like I had. I finished my paper 1 hour before it was due. Yup, I hit every point. My APA format and references were spotless. I saved, closed, logged in and uploaded my work. YES! We went out for fajitas and margaritas to celebrate. Cake and ice cream too. The next morning, something prompted me to check. Oh, My paper's already graded. But what I read didn't make any sense: where's the data, no conclusion, references not in format, a D! No, no. I checked the attachment and confirmed my fear. I turned in the rough draft saved on my desktop. She never saw my final paper. I emailed, totally crushed and embarrassed, to explain. It was too late, grades have been submitted. I'm still kicking myself thinking about it now. But then, I think about the fact that I still got an A in the course. A-, but really, who sees the -.

Story # 2
On Sunday, Chattman, Sam and I headed up to Golden Gate State Park to find a new climbing crag. While I was driving, the gas light came on. It's fine, I drive on E for days sometimes. I'll get it on the way out.  I've only run out of gas once in this truck. Besides, I've already passed the last gas station. After some hill climbing and gage dropping, there was a sign that read 9 more miles. Oooh, this might  be longer than I thought. (I can imagine this is reading like a bad horror movie. You're just screaming "Ditch the high heels, get out of the rain and turn around for gas you stupid girl!") Well, that though did not cross my mind. Instead I thought, I'll just go real slow up the rest of this hill, put her in neutral on the way out and just coast down to Golden.  Don't tell them. You'll make it back to the gas station and they'll never have to know. We finally got to the entrance and Chattman read the rest of the directions, "After turning, drive down to the end of the dirt road." Oh No. I have no idea how much farther it is.

"I need to tell you guys something.... we don't have a lot of gas,"
"What! Are gonna run out of gas?"
"Uuuum, I don't think so."
"We're totally gonna run out of gas." (They saw the gas gage)
"Maybe"
"We should turn around and get gas"
So, I turned around. They started laughing, probably out of pure frustration. I find the whole thing to be hilarious, so we all laugh for a while. I laughed longer than them. Through my laughter, I revealed my train of thought, or lack lack there of. I can't believe that I never thought to just turn around and get gas. They were not impressed with my plan to keep it in neutral since it made the brakes do crazy things. That didn't last long. We made it to the gas station! I filled up with 18.9 gallons of gas.
"Round two."
"We do it right because we do it twice!"
Back to the park we went. 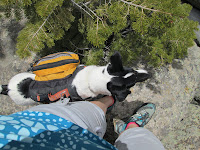 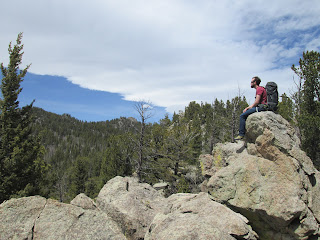 Conclusion:
It was a weekend full of foolish decisions.
These stories do not portray me is a very positive light, I know. Procrastination may be the base of the problem. It was pretty funny though. I probably won't learn my lesson since I still got an A and didn't actually run out of gas. I'm kidding. I've learned my lesson. (Sam says I have not learned my lesson : )

Directions
- Heat oil in a large skillet on medium.

- Mix all the spices together in a wide, shallow bowl.

- Drop in the pan of hot oil and cook for 3-5 minutes, until blackened

Cerri
Denver, Colorado
I love food. Love cooking it. Love eating it. Desserts are my passion. However, I’m slightly obsessed with being healthy. I love playing outside, mostly rock climbing, but most anything will do. Crossfit is my new fixation. Sam (the hubby) and I travel and play as much as we can. I teach first grade, which is hard work, but frequently fun and always hilarious! I also love animals, which leads to my wild food transitions over the past 5 years… typical american.. vegan.. vegetarian.. sometimes gluten-free.. now pescetarian (fish, no meat) with a Paleo tilt. Gotta make your own choices. I understand and respect all my friends’ food lifestyles. But now I’ve got a little something for everybody.